This past summer,  I went to Houston to get my eyes checked by the pros from Dover.  I had to wait about six weeks because one of the doctors is the Greg House of eye doctoring and there was no room in his schedule to see me.  Needless to say, the wait to get my eyes checked was awesome. (By that I mean, terrifying, nerve-wracking, and panic-making.  I tend to err on The Worst Thing That Could Happen side of things.)

I was down in the swamplands because I’d complained to my regular eye doctor about this problem I’d been having with my eyes.  I’d noticed that it was taking an inordinately  long time for my eyes to adjust from light environments to dark ones.  She looks around in my eye, leaves the room for about ten minutes, comes back in and says, “Here are directions to Austin Retina.  I’ve already set up an appointment.”

Perhaps my look of utter panic made her say, “I don’t think you have retinitis pigmentosa.”  Well, good.

So I hop into my car, zip off the Austin Retina, and go through a battery of tests.  One of which was injecting dye so they could get better pictures.  They didn’t warn me that it would color everything red like a low-budget horror film from the 50s.  For a moment, I expected there to be a giant shadow of a knife-weilding maniac on the wall behind me.  So disappointed.

More tests. More pictures of my adorable eyeballs. Finally, I see the doctor who immediately starts using massive amounts of medical jargon while explaining that he has no idea what’s going on with my eyes.  (And I love, love, love jargon.  Normally, I would have been tickled. Not so much this time.)

And that doctor sends me to Houston to see the pros from Dover. More tests. Hilariously enough, the new tests involve being stuck in a tiny dark room with a lab tech and the person she was training, jamming my face into Hammer film torture device that flashes lights in your face while your eyes are dilated, and at one point having suction cups attached to my eyes.

The suction cup thing didn’t hurt a bit, by the way.   Really, I was anticipating a Ludovico experience, but, instead, it was completely benign. 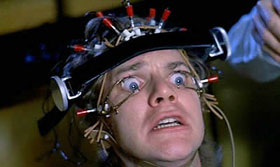 The test results come back while we’re waiting. There’s nothing organically wrong with my retinas. So, we continue on the final appointment.  I answer a lot of question, my eyes get dilated again (now there’s torture), and the result is: I’m a medical mystery.

That’s right. Nothing wrong with the retinas, but right underneath is a layer of cells that are mysteriously (and symmetrically) discolored. No idea how it happened. I’m not going blind. The weird problem with the adjusting between bright and dark isn’t going to go away, but it’s not a serious issue.

What I discovered was to not freak out until you have all the facts. (I know, it is my usual go to position.) When there’s weird shit going on with your body, get it checked.

I say the second because in the last year, I’ve lost two friends. They both died because they were worried about going to the doctor because it might be expensive. (I’m lucky. I have insurance right now so this is easy for me to say.) But believe me when I say, your friends and family would rather help you pay your damn bills than put you into the ground. 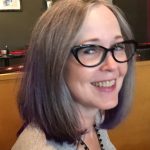